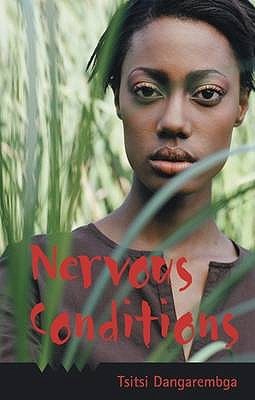 "The business of womanhood is a heavy burden.  How could it not be? Aren't we are the ones who bear children? When it is like that you can't just decide today I want to do this, tomorrow I want to do that, the next day I want to be educated!  When there are sacrifices to be made, you are the one who has to make them. And these things are not easy: you have to start learning them early, from a very early age."

Nervous Conditions is the coming of age story of fourteen year old Tambudzai, who lives in rural Zimbabwe but is able to attend a missionary school following the death of her older brother, Nhamo. Living with her aunt and uncle in a house on the mission grounds, Tambu is at first overwhelmed by their lifestyle. But the more she becomes accustomed to it, the more she starts to feel herself better than her beginnings. Tambu is determined to be educated and to provide for herself, but she keeps coming up against prejudices and barriers based on her gender, meaning that she has to battle for what she wants. Her story is contrasted with the stories of the complex women in her life; her Westernised cousin Nyasha, starting to examine the effects of colonisation, her uneducated mother, tied to a man she doesn't love by her children, and her mother's sister, forceful, outspoken and determined to do what is right for her and the people she loves.

Nervous Conditions is a wonderful book, and lots of that is to do with Tambu herself. As a narrator she is self-aware, honest, intelligent and full of complicated thoughts about the people around her. It helps that Dangarembga's writing is vivid, peppered with Shona vocabulary; reading Nervous Conditions is like being immersed in the Shona culture of the mid twentieth century.  This isn't a novel written with a Western audience in mind, and I liked that.

What I loved most about Nervous Conditions is that Dangarembga never over-simplifies the complex issues of gender, race and colonisation. Tambu is quick to realise the limitations placed on her by her gender, for example when her father states that it isn't worth educating her, as she will only get married and belong to another family.  Tambu also notes the powerlessness of her mother in the family, and the negative effect of her many pregnancies, but Dangarembga also writes about powerful Shona women, who are uneducated, but still refuse to accept gender boundaries. And the same is true of race and colonisation - Tambu views a Western education and lifestyle as her ticket to happiness, but her cousin Nyasha, who has actually lived in England for a spell, is torn between her conflicting identities and feels isolated from her Shona heritage. The portrait of both of these issues is complicated, many-layered and realistic,

To be honest, the only thing I didn't like about Nervous Conditions was the cover, which I think looks too cheaply made for the quality of the book. Although this book is set in a specific place and time period, it's coming of age theme is universal and it's one I would highly recommend.