Angels and Demons by Dan Brown 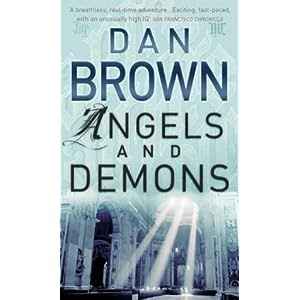 Angels and Demons by Dan Brown

After reading Emma, which required a bit of concentration at times, I decided I wanted something a bit more easy-going & face paced.  I read The Da Vinci Code a few years ago when everyone was going crazy for it, so when I saw this for £1.50 in a charity shop I couldn't resist.

Synopsis: Harvard Professor Robert Langdon is called to the CERN scientific research facility when a scientist is murdered in a gruesome way linked to the Illuminati.  He uncovers a plot against the Vatican and must work against time to stop the worst from happening.

I very much enjoyed this book.  It was easy to read, and although I guessed who the 'bad guy' was about half way through, there were so many twists and turns that there were still surprises.  It was obviously well researched and quite complex things were explained clearly (especially to do with CERN).  While Langdon was a bit bland, lots of the more minor characters just leapt off the page and were both interesting and well written.

As with The Da Vinci Code, I thought it got a bit silly/unbelievable towards the end, but that's OK because I was enjoying the book.  The plot was better than the writing style, which was a bit corny at times (my favourite was: "Langdon didn't need to be a symbologist to interpret the signs Vittoria was giving him" - smooth!).

My only real issue with the book was the main female character, Vittoria.  She was just too perfect to be believable - beautiful, best physicist in the world, randomly knows lots about the Vatican & the Illuminati, tough, never gets tired etc.  I thought that about the Da Vinci Code too, that the female characters Dan Brown writes are just too amazing to exist and despite of all Vittoria's intelligence, she's still just a side-kick.
Posted by Sam (Tiny Library) at 16:41 8 comments:

One of the perks of being a teacher is the long summer holiday (six weeks here in the UK).  I go back to school on Thursday, but have had lots of time to read, catch up with friends and just generally get everything sorted out.  Last night I put a film on and decided to organise some of my books.


I am a natural organiser, and organising things makes me happy.  My books were arranged by genre, and alphabetical for fiction, which was very practical so I decided to be completely unpractical and arrange two of my shelves by colour, to create a kind of rainbow:

It's completely impractical, because colour is not exactly a defining feature of a book, but I'm pleased nonetheless.  It'll force me to look through things properly when I'm looking for a book rather than just choosing a genre. My other two shelves do look a bit drab now though!
Posted by Sam (Tiny Library) at 11:15 7 comments: 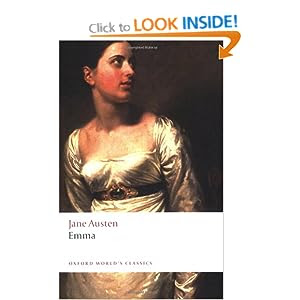 In the summer, I always try to read some classics, because I have the time to concentrate and read them properly.  My sister is a Jane Austen nerd (she did a module called 'Reading the Romance' at university) and gave me an extra copy of Emma a few weeks ago, so I decided to give it a whirl.

Synopsis: Emma fancies herself as a bit of a matchmaker and tries to set up all of her friends, although things don't quite go as she plans.

I liked this book well enough.  The character of Emma was engaging (I loved that she wasn't perfect) and easy to relate to.  Austen used the trick of letting the reader know what Emma didn't, meaning that we could easily see what was going to go wrong and sometimes it was funny (though probably would have been funnier when it was published).  Some of the more minor characters were really well done too, especially Harriet and Mr Elton.

I just didn't love the book though, like I loved 'Pride and Prejudice'.  It seemed very long and not much actually happened. All the comic plays on class distinctions were not as relevant or sharp as they would have been when it was written.  And Mr Knightley seemed too perfect, not like a real person at all.  If he really was that perfect, why did he like Emma? 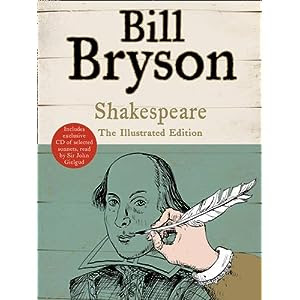 Synopsis: A brief biography of Shakespeare that tries to establish what we can really know about him for sure, rather than what we can just guess from reading too much into his plays.  This is a special edition, each page has illustrations and there's also a CD of Shakespeare's sonnets.

I mainly picked up this book because I love Bill Bryson, and will read anything he writes.  I also loved Shakespeare back when I was doing my English Literature A-Level but hadn't read much either by or about him since.  As always, I found Bryson really readable and the edition of the book was just beautiful.

I knew next to nothing of Shakespeare's life before I started reading (apart from the controversy over him maybe being gay) so there was new information in the book for me. To be honest, I found it more interesting reading all of the different theories crazy people had put forward about his life, based on one line of text from one of his plays.

The book was also a kind of travel-guide to Elizabethan England, and this bit was really well done.  One of the things I love most about Bill Bryson is that he always seems to realise what the most interesting parts of any topic are, and covers just these.  So the book was short, but easy to read and enjoyable.
Posted by Sam (Tiny Library) at 15:44 No comments: