The Strange and Beautiful Sorrows of Ava Lavender by Leslye Walton

Ava Lavender is the daughter of a woman scorned in love and the granddaughter of a woman haunted by the ghosts of her past.  She also happens to have wings, which she was born with.  In The Strange and Beautiful Sorrows of Ava Lavender, Ava traces the history of the women in her family, and the ways in which love in all its forms has caused them pain.  Their stories lead naturally on to her own, as her wings make her the focal point of a dangerous obsession.

The Strange and Beautiful Sorrows of Ava Lavender is an unusual book that is hard to describe.  The thing I enjoyed most about it was the quirky tone and narrative voice.  Walton's world just hints at the magical, and at the fairy tale, a world in which wings, ghosts, children with different coloured eyes, and cakes infused with the feelings of the baker, are possible.  I love books with atmospheres like this - our normal world painted in vivid technicolour.  Ava Lavender is as a result a very visual book, and one that would be great turned into a film.

I mentioned above that this story is a bit like a fairy tale, and therefore there is a darker side lurking underneath the surface.  Emilienne and Viviane (Ava's mother and grandmother) are troubled by love in rather ordinary ways, but Ava really experiences the darker side of obsessive love.  The later sections of the novel deal with brutal events, which seem even harsher set against the imaginative setting. I found what happened to Ava to be problematic, not because I don't think violence against women shouldn't be written about, but because there was a glamour to the scene.  Ava's sorrows are beautiful, it's all in the title, and her attack and it's consequences are written about in the same, fairytale, beautiful-tragic way.  When really it's just tragic and there are fewer things in life that would feel less beautiful.  I'm sure this was completely unintentional, but it still bothered me.

I found that I connected with Emilienne and Viviane better than Ava herself, as Ava remained a bit of a mystery throughout the novel.  I particularly connected with Viviane's story, her years spent pining after a lost love that didn't really turn out to be a love after all.  Including all three women in the narrative was definitely a good decision.

On the whole, I did enjoy The Strange and Beautiful Sorrows of Ava Lavender.  The writing style and the magical elements worked fantastically together, and it was a pleasure to pick up.  Fans of Sarah Addison Allen will enjoy this one.

Water for Elephants by Sara Gruen 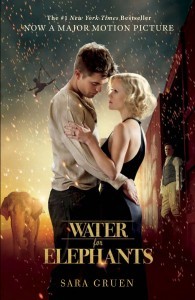 Jacob Jankowski is a veterinary student about to sit his final exams when he receives the devastating news that his parents have been killed.  Desperate and unable to cope, he hitches a ride on a freight train that turns out to house the Benzini Brothers Most Spectacular Show on Earth.  The circus has fallen on hard times due to the Great Depression but Jacob's background ensures him a job as the circus vet.  Jacob is seduced by the exotic animals, glamour and romance of the circus life, but there are darker currents running underneath the sequins and glitter.  When he falls in love with married performer Marlena and the circus acquires Rosie the elephant, Jacob finds himself tested.

As always, I bought this book when it was surrounded by a lot of hype but then failed to read it in a timely manner.  I also failed to see the film, so I went into Water for Elephants with completely fresh eyes.  I was expecting a light, sentimental type read, and that's exactly what it was.  Even though Water for Elephants discusses some heavier themes such as animal cruelty, murder and the brutality of circus life, it does so in a Spielberg-esque way that left me in no doubt that things would be OK in the end.  It's like life without the sharp edges, and it makes for comfortable if not challenging reading.

My favourite element of Water for Elephants was the setting.  I'm not surprised this novel was turned into a film, as it's so visually evocative of both the time period and of the circus.  I could almost smell the popcorn and taste the excitement that the circus bought to the dreary towns it stopped in.  I also really enjoyed the character of Marlena, who had more guts than I initially took her to have.  The bits dealing with Rosie and the other animals made me want to try Gruen's novel Ape House, as I liked the way the animals were characters in themselves.

However, there were some flaws.  Jacob falls in love with a married woman, which could have made for some interesting complexity in the novel, but Gruen shies away from this by making her husband to be a bad guy.  This seemed a little too convenient for the plot.  As I mentioned above, there's never any doubt that things will end well for Jacob, and this takes away some of the tension.   Despite this, Water for Elephants is a really fun, escapist read.  I loved immersing myself in the world of the circus for a while.