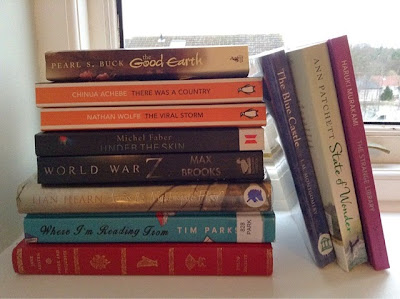 January was an awesome reading month for me, the best since Giles was born in June.  Not only did I finish 11 books and 3259 pages, but I was really into reading and lots of the books ended up being 4 or 5 star reads. I read the following (links to my reviews):

My favourite book of the month was unquestionably The Blue Castle.  Even though Under the Skin and The Good Earth were also five star reads, The Blue Castle was just so cosy and comforting, and I loved Valancy's journey to independence and freedom.  The only disappointing book of the bunch was World War Z, which was a good idea but way too heavy on the army and logistics front.

In terms of diversity, 18% of the books were by authors of colour, and 36% by authors that aren't British or American.  I'm OK with that, but I'd still like to read more works in translation, something I'll keep in mind for February.  I read 36% non-fiction, which I am thrilled with, and my reads included classics, fantasy, horror, science, literary fiction, history and essays.  I'm glad that I'm reading a good mix of things and not getting stuck in a particular genre.

Eight of the eleven books that I read were from my TBR shelves, which would be amazing if I hadn't also purchased the following eight, thus cancelling out all of my good work: 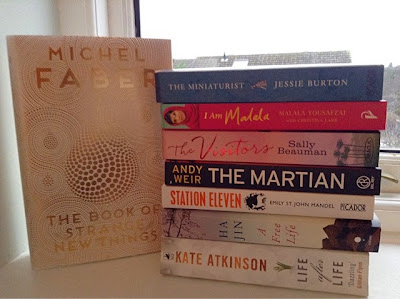 Still, at least I haven't added to my overall TBR!

Looking forward to February, the only thing I will definitely be reading is Robert Jordan's The Fires of Heaven, book five in the Wheel of Time series.  I'm currently about half-way through it, but it's a chunky book so should keep me happy for some time.  After that, I'm going to read mainly by whim, but hopefully knock one book off my classics club list, and one off either of my Project 1001 lists.

How was your reading month?
Posted by Sam (Tiny Library) at 17:53