The Bellwether Revivals by Benjamin Wood 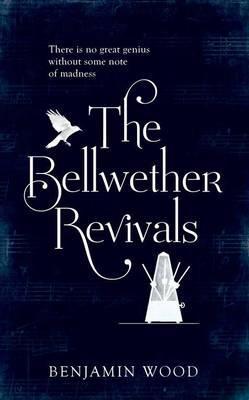 Oscar is a care assistant working at a nursing home in Cambridge. Despite being very intelligent, his academic career was cut short and he has always dreamed of attending one of the famous colleges near by.  One night, he finds himself drawn into a concert by the haunting sound of the organ, and there he meets Iris Bellwether, a medical student at King's College.  Through his relationship with Iris, Oscar becomes part of a group of students revolving around Iris' brother Eden, a gifted musician.  Eden is charismatic, bizarre, brilliant and perhaps a little insane.  As Eden begins to develop strange and possibly dangerous theories about the power of his music, Iris reaches out to Oscar for help.  Is Eden a great genius, or will his arrogance and instability damage the group?

I should start this review by pointing out that I've never read The Secret History or Brideshead Revisited, although plenty of other reviewers have noted similarities to these titles.  I went into The Bellwether Revivals with fresh eyes and I found it a bit of a mixed bag.  There were parts I loved, and parts where the narrative seemed to drag a bit.  Mostly, I loved the setting and the characterisation of Eden.  I'll read pretty much anything set at Oxbridge or amongst privileged individuals (I know, I really do need to get to The Secret History). so I was guaranteed to love this part of the book, the exams and colleges, textbooks and bicycles, grand houses and wealthy parents.  Wood's Cambridge has a slightly gothic atmosphere as well, which only added to my enjoyment of the setting.

The characterisation of Eden was superb too.  Wood perfectly captures that kind of person who is either manically clever or completely insane.  Eden has a magnetic personality that draws other people to him and his charisma is almost a force.  I enjoyed all the little details about Eden, like his notebooks full of scrawling, his air of superiority towards Iris, and the crazed way he plays the organ.  Wood keeps plenty of ambiguity about Eden, so you're not quite sure whether he is what he says he is throughout the novel.  Although Eden was such a well developed character, some of the others felt flatter.   Oscar was a bit of a bright-boy-held-back-by-working-class-family stereotype, and some of Eden's friends (Jane and Marcus particularly) just seemed to be there to make up numbers.

My main issue with The Bellwether Revivals was one of pace.  The book opens and closes with the same dramatic event, but the middle section felt a bit heavy by comparison.  I was keen to keep reading to find out what was going to happen, and I enjoyed the big reveal at the end, but it felt like I had to wait a long time to get there.  I'm not sure what Oscar's favourite patient Dr Paulsen added to the narrative; I know he had to be there for the plot to work, but his sections could have been cut considerably.

On the whole, The Bellwether Revivals was a worthwhile read.  If you enjoy books with academic settings or mysteries, you're sure to like this one.