The Marriage Plot by Jeffrey Eugenides 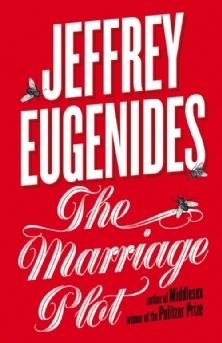 Madeline is in the final year of a literature degree.  She's reading classic authors and writing her thesis on the use of the marriage plot in the novel, a topic seen as seriously outdated in the university culture of the 1980s.  As she finishes her final year at university and attempts to find her way in life after it, her path entwines with that of two men, Mitchell and Leonard.  Mitchell, a religious studies graduate, is keen to travel the world in search of mystic experiences.  He is also certain that he is destined to end up married to Madeline.  Leonard is a talented scientist promised a research fellowship at one of the most prestigious centres in the country, but his charisma covers a difficult battle with bipolar disease.  As Madeline navigates the stormy path of life after college, will she find herself starring in her own marriage plot, or is the marriage plot truly dead?

I'll be honest - I picked this book up purely because it is by Jeffrey Eugenides.  The Virgin Suicides is one of my favourite books and I really enjoyed Middlesex, so at this point I will buy and read anything Eudenides puts out without a second thought for whether or not the plot is appealing.  With that in mind, my overall impression of The Marriage Plot is that it was very well written (I'd expect nothing less), but much more self-consciously literary than either of Eugenides previous works, and therefore not quite as enjoyable.

I agree with a lot of what Eugenides is trying to say in the novel, mainly that there is still room in literature for a book that tells a simple story, that our stories may have changed with the complications of modern life, but that readers still want a story that tells them something about the dilemma of the characters.  There's a lot of gentle fun being poked at undergraduates and literary criticism in general, which was enjoyable too.  But the whole time I was reading, I felt as though Madeline, Leonard and Mitchell were just vehicles for Eugenides themes, rather than the central drivers of his story, if that makes sense.  They didn't jump off the page and I didn't fully connect with them emotionally.  In marriage plots, you're supposed to really care who the main character ends up with, and although I thought Eugenides' twist on the classic plot device was clever, I didn't feel that connection.

I don't want to come off as too harsh, as The Marriage Plot is still a very good book.  I thought Eugenides' portrayal of mental illness in the form of Leonard, and the effect that it can have on the people around you, was very strong and I found these parts of the story gripping.  I loved reading about Mitchell's adventures in India and his struggle to decide what kind of person he was.  As I mentioned earlier, it goes without saying that the whole thing was well written and for quite a chunky book, I just sped through it.

I think that if I hadn't already read The Virgin Suicides and Middlesex, I would have adored The Marriage Plot and would at this point be rushing out to find everything else Eugenides had ever written.  But because I have read his previous work, I couldn't help but compare them, and The Marriage Plot just didn't quite live up to expectations.