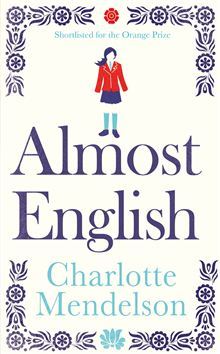 From now on, you are going to be seeing a lot of reviews of books long-listed for the Baileys Women's Prize for Fiction.  Almost English, the story of a part Hungarian school-girl trying to find her place, is the second off the list I have read.  It's the story of Marina and her mother Laura, living in London with Marina's Hungarian relatives.  Her Dad, Peter, has vanished without a trace, leaving English Laura struggling to fit in with Hungarian family life and Marina just wanting to be normal.  Having decided that the best way to be properly English is to attend a prestigious boarding school, Marina moves to Combe Abbey, only to find that her romantic fantasies of the new person she would become there have little to do with reality.

I was really looking forward to Almost English.  Despite not being an immigrant myself, I am really attracted to stories about the immigrant experience as they appeal to something deep inside all of us, that need to fit in, to belong to something.  The blurb really plays up Marina's heritage and I was interested in the juxtaposition of Marina with her very British boarding school environment.  But Almost English isn't really about that.  It's really a story of emotional insecurity and distance, of a mother and daughter that torture themselves with anxiety but who are unable to reach out to each other.  And it was still a good story, but it wasn't the one I was expecting it to be.

The thing I most enjoyed about Almost English was the character of Marina herself.  I was a painfully awkward, anxious teenager (some days not much has improved!), and I really related to her constant indecision and worry.  Mendelson perfectly captures that teenage experience of feeling like everyone is watching you, that your every move will be criticised and judged by the silent hoards around you.  Combine that with an active imagination and you end up with Marina; someone who thinks herself in love with a boy that she has never even spoken to, who lies awake agonising over a throwaway comment and who attaches great importance to small events.  I could relate to her so well that reading the book wasn't always a comfortable experience!

Almost English was one of those books that had a lot of potential but ultimately didn't really go anywhere. The characterisation was excellent but the plot was a bit weak, with too many threads that either didn't tie together, or which felt contrived.  Marina's 'seduction' by her boyfriend's very-British father felt a bit plot-by-numbers, and Laura's anxiety was never fully resolved.

Ultimately, Almost English failed to live up to my expectations. I needed a stronger plot and more overall direction.  I'll be surprised if it makes it on to the short-list.