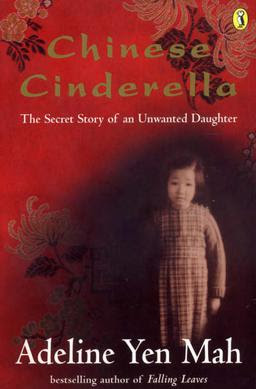 Chinese Cinderella is a memoir of growing up as an unwanted child.  After her mother died giving birth to her, Adeline is regarded as bad luck and a nuisance to her new stepmother.  Although she shows great academic promise and would do anything for love and acceptance, Adeline is ignored at best or treated with cruelty at worst.  Her coming of age story is told alongside the history of the Chinese civil war and the emergence of the Communists as the ruling party of China.

I had no idea that this memoir was aimed at children until I started reading it, so I had to adjust my expectations accordingly.  I really enjoyed the tone of the memoir, how Adeline's experiences are relayed without sentimentality, as this gives the book more power.  Had I picked this up as a child, I would have loved it and would have inspired me to learn as much as possible about China.  As I am an adult and I've already studied Chinese history a bit, I found some of the explanations of what was going on around Adeline too simple.

The real power of the book is in Adeline's grit.  At one point, she writes about how she read Frances Hodgson Burnett's A Little Princess, and resolved to be as strong as Sara.  And she is.  Although we see Adeline being damaged by a total lack of affection and abandonment, she manages to overcome her experiences.  There's no fairy godmother in this Cinderella story, instead we get Adeline working hard and finally earning her right to travel abroad to study.  This message, of inner strength and persistence is a great one for all of us, regardless of our age.

This book is definitely one I will be recommending to the children I teach, and to Giles when he is old enough.  It's a good example of a well written memoir aimed at children.