Next World Novella by Matthias Politycki 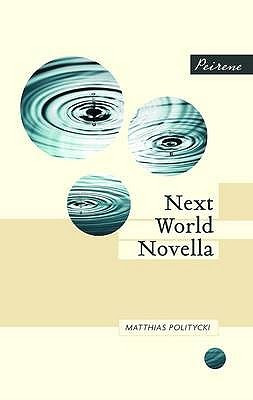 Next World Novella is the first book in the Peirene series on Male Dilemmas: The Quest for Intimacy (I have previously reviewed all of the novellas in the Female Voices series; Beside the Sea, Stone in a Landslide and Portrait of the Mother as a Young Woman). Hinrich Schepp is an ageing academic in a seemingly happy relationship with wife Doro. He enters their apartment to find her editing one of his manuscripts, a regular occurence.  But things aren't as they always are - Doro has passed away and the manuscript she was editing was Hinrich's long abandoned attempt at a fiction novel.  Using the disguise of story, Hinrich has revealed much about the past and he is shocked by Doro's alterations as they show she knows more than he ever realised.  Sitting down next to her corpse to read, Hinrich has to face up to his past and the disintegration of his superficially happy marriage.

I really enjoyed Next World Novella, more than I expected to.  I loved the wry voice of the author, the black humour and the macabre tone that pervaded the whole book.  There are many details of death included, giving the novella a gothic feel that appealed to me.  Politycki is clever in that he guides you to judge and poke fun at Hinrich but at the same time you can't help but feel sorry for him.  One moment you're judging him for fantasising about attractive waitresses within a few minutes of discovering his wife's corpse and the next you want to stop him from embarrassing himself with his clumsy attempts at an extramarital affair that have you cringing.

Hinrich traces the decline of his marriage to an operation he had to improve his vision; "It was terrible to see the world in such detail, so sharply outlined, all of a sudden!  It dazzled him with a confusingly large number of details". In a sense, this is a metaphor for the whole story.  Hinrich and Doro's marriage looks happy if you only look at it quickly, or not thoroughly.  As soon as you start to dig deeper, the misery becomes apparent.  The majority of the novel is narrated from Hinrich's point of view and it's black comedy at it's best but doesn't elicit too much emotion.  However, the final part is Doro's editorial opinion on the manuscript and this is the heart of the novel.  I had been reading along, poking fun at Hinrich whilst secretly pitying him and I simply wasn't expecting the emotional punch of Doro's words.  It's easy to forget the impact that one person's actions can have on another.  Including Doro's voice at the end made the novella cohesive and more powerful than Hinrich's narration alone could have been.

Putting aside the death and descriptions of the decay of Doro's corpse, Next World Novella will ring true for a lot of readers.  It's easy to ignore slow but serious decline in our personal relationships and it's often only when you look back that you realise how far things have gone.  Hinrich and Doro never found the relationships they were hoping for and both suffered with a lonlieness that must be very common.  The mix of this serious theme and the hints of comedy really worked for me.  It's one of my favourite Peirene novellas so far and will be hard to beat.