Half of a Yellow Sun by Chimamanda Ngozi Adichie 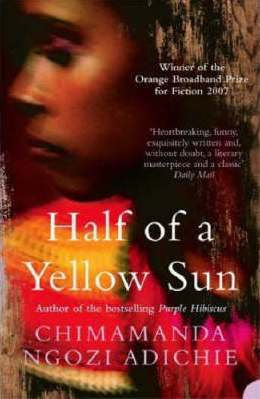 Okay, time for a bit of a history lesson.  I knew nothing about Nigerian history before reading this wonderful novel, but here is what I learned:  Nigeria was ruled by the British until the late 1960s.  During this time of colonial rule the Igbo people were perceived as doing better than the other tribes.  After the British left, there were mass uprisings/ethnic cleansing against the Igbo people, especially by the Hausa tribe.  This led to them breaking away and forming their own state, Biafra.  The flag of Biafra was half of a yellow sun.  The Nigerian forces deliberately used starvation as a tactic against Biafra and eventually it fell.  Both sides recruited child soldiers.

I learned all of this without realising I was learning it by reading Adichie's novel.  It's narrated by three distinct people: Olanna, the daughter of an Igbo chief; Richard, an Englishman who has fallen in love with Nigeria and later Biafra; and Ugwu, a houseboy for an Igbo professor.  All of their lives overlap and they are thrown together as the war descends.

I can't describe just how much I enjoyed reading this book.  It was a real epic and dealt with some harrowing topics - rape, genocide and child soldiers - and the central characters were just so vivid that everything had more impact.  What I thought was really powerful was how Adichie had them becoming less and less concerned with their previous problems as the war overtook them.  Olanna hadn't spoken to her sister in years but when she witnesses war, all of that fades away.  It seemed to me like a realistic portrayal of war, although thankfully I have never experienced it.  The whole book had lots of emotional impact, to the point where certain scenes were hard to read.

The structure of the novel broke up the harrowing parts from the pre-war parts well, and it was all anchored by extracts from a book about the conflict that one of the characters was writing.  Although Adichie is Nigerian, it never felt like she was trying to preach or convert, simply telling a story about what happened to millions of Biafrans during that time.  The writing style was simple, but very powerful.  The pace moved from slow in the sections about the time before the war, to almost frantic as events escalated.

Can't recommend this one enough.