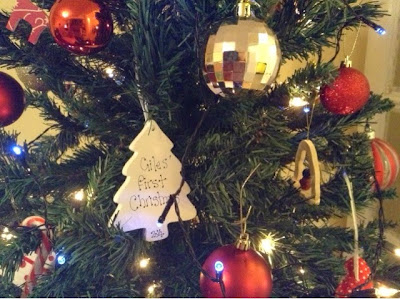 All of my best blogging intentions have gone out of the window recently, as I've had the most exhausting week.  On Monday, I spent the morning in work for some training, and when I got home with Giles I noticed that he had a really bad cough.  He had been suffering with a cold the previous week, but this seemed to be worse than just the sniffles.  By Wednesday, he was wheezing and refusing feeds, so we took him to the out of hours GP, who examined him and told us to take him straight to A&E, where he was diagnosed with bronchiolitis.

Bronchiolitis is a viral infection in which the bronchioles in the lungs swell, become full of mucus and can be very painful.  As it's a virus, there is no treatment for it.  It's something that lots of babies develop and it usually only causes mild symptoms.  However, Giles has got a particularly bad case of it, meaning he needed nebulizer treatment to clear his lungs, as he was having to work hard to breathe.  We had to return to the hospital for more treatment on Thursday, and he was almost admitted.  Thankfully he is doing a bit better now - he still sounds like a chain smoker when he breathes, but he is drinking his milk again and I'm not checking his breathing every five seconds.

As you can imagine, everything else has gone out of the window this week.  I'm getting about two hours sleep a night, and spending the rest of the night rocking Giles, as it's so hard for him to get comfortable enough to sleep.  Being a parent is a worrying business at the best of times, but it's worse when your child is ill.  Hopefully he has turned a corner now and will make steady progress this week.  The doctor expects it will take several weeks to clear completely, but we should be out of the worst of it soon.  His first tooth is also pushing through, which only adds to his overall discomfort levels!

One thing we have managed to do is decorate the Christmas tree.  Every year we buy a new bauble, and this year we purchased a personalised Christmas tree decoration for Giles' first Christmas.  I love the tree being up and the lights twinkling away.