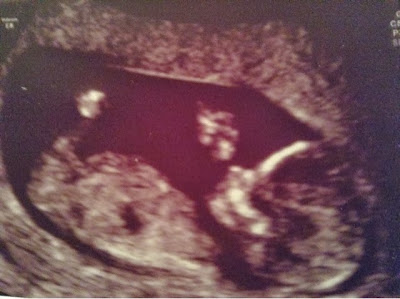 I've been a bit of a bad blogger these past few months and finally I can reveal why - I'm three and a bit months pregnant!  I had my first scan earlier in the week and it was amazing to see the baby wriggling around on the screen, as well as a massive relief to find out that everything is going well so far.

This is very much a planned and hoped for pregnancy.  It took almost a year for me to fall pregnant, but in the end it worked out that I conceived the month of our ten year anniversary of becoming a couple, which is actually quite fitting.

The reason being pregnant has impacted on my blogging is that I've had a pretty rough first couple of months so far.  I've had quite bad morning sickness; I felt nauseous from week five and then I've actually been sick practically every day from week six up until now.  One memorable Saturday I was actually sick six times, which was just horrible.  I've learned that it is extremely hard teaching and managing a class of thirty seven year olds whilst being so sick!  I've also been feeling pretty tired / drained, but that's much easier to cope with.

But the good news is that in the last week, I've started to feel like myself again.  I'm still being sick but I don't feel ill in quite the same way I did before.  Food is starting to actually appeal and I no longer look so much like a zombie.  I'm hoping this means that my second trimester will be a bit easier than the first, and that the constant sickness is on it's way out.

And of course, it's wonderful to be able to tell people that I'm pregnant.  Both of our families are really excited and happy, and everyone I have told has been so genuinely pleased for us.  I'm due on June 11th and I honestly can't wait.  Now that I've had my scan we're allowing ourselves to think about things like what we will need to buy, how we want to do the nursery, what names we like etc, because it feels much more real and exciting now.  I can't wait!

Reading-wise, I'm still plodding through Les Mis, and still enjoying it.  I'm about 450 pages in at the moment, which I'm relatively pleased with.  Riv from Bookish Realm and I are going to be reding A Christmas Carol together the week after next, and my hold on Brandon Sanderson's Steelheart finally came in at the library, so I'll be reading other books alongside Les Mis in the run up to Christmas, as well as trying to finish up my shopping and get ready for the holidays.

Hope everyone had a good week.