The 19th Wife by David Eberschoff 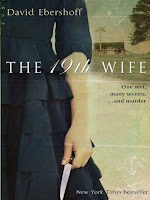 I chose this book because I read a glowing review about it on another blog.  It certainly won't be the last I choose for this reason - my to read list is expanding daily thanks to all of your wonderful reviews!

Synopsis: This book is split into two strands.  One strand tells the story of Ann Eliza Young, the 19th wife of the Mormon leader Brighman Young as she fights to leave her marriage and make polygamy illegal.  Alongside this is the modern story of Jordan Scott.  Cast out of the First Latter Day Saints for holding the hand of a girl, he recieves the news that his mum (also a 19th wife) has been arrested for killing his dad.  As he attempts to find out the truth, he discovers more and more about his family and religion.

I liked this book but unfortunately not as much as I was hoping to.  I very much enjoyed the historical section of the book and the way the author told this tale through newspaper clippings, memoirs, diary entries and even fake wikipedia entries (I'm a sucker for this style in general though!).  Although I don't know enough about Mormon history to discern between what was real and what was embellished by Eberschoff, the historical characters rang true and had a lot of depth.  Ann Eliza wasn't made to be a hero and Brigham wasn't demonised, which added to my interest.

Unfortunately the modern section didn't hold my attention as well.  I started off enjoying it but as the book progressed I found myself wanting to skip through the Jordan section in order to get to more about Ann Eliza and Brigham.  Jordan didn't seem like a real person - he was one dimensional and his relationship with Tom was much too cozy and convenient to be believable.  The revelation of who actually killed his dad was a let down too, even though by that point my interest had waned.

I think part of this book's problem was it's length at 600+ pages.  There was a gem of a story in there trying to get out, but there wasn't enough action to sustain the length and some sections could have been severly edited down (Brigham's prison diary, all the stuff about the dogs).  By page 400 or so I was ready for the resolution of both strands of the novel and was impatient to finish.  It's a shame as I feel the concept for the novel was a great one.