The Adventures of Huckleberry Finn by Mark Twain 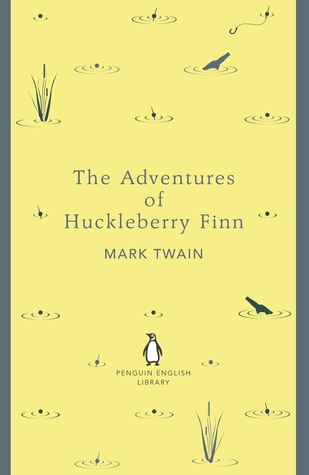 In the sequel to The Adventures of Tom Sawyer (my review), Huckleberry Finn is centre stage.  This made me excited to pick up the book as Huck was by far the most interesting character in Tom Sawyer.  Tom is a lot of fun and his imagination is amazing but he comes from a sheltered, loving family, whereas Huck is that child from the wrong part of town.  If Huck existed nowdays, he'd be the child who always turns up late to school without any equipment and in the wrong uniform, who hasn't been washed in a few days and who has been forced to grow up too quickly by being exposed to things he shouldn't have been.  In the story, Huck's main problem is his abusive, alcoholic father, who he eventually decides to escape from.  On the way, he meets runaway slave Jim, and the pair travel down the Mississippi together.

Huck Finn is a better book than Tom Sawyer, and it's all because of Huck himself.  Huck could have been a stereotypical character but Twain writes him in a wonderfully complex way.  Despite all that has happened to him, Huck has retained his essential goodness and also the bravery to go against society if he needs to.  We get to see him really grow up throughout the novel, as he goes from someone who is lacking in self-confidence and looking to those around him to decide what to do, to someone who makes their own decisions, even if society tells him he is wrong.  All through the book, he wrestles with the fact that he should hand Jim in, as this is the way he has been taught to think about slaves.  But Jim is actually one of the only people looking out for Huck, and the development of their friendship and Huck's decision to stick by Jim, even though he thinks that makes him a bad person, are handled masterfully by Twain.

I also liked that Huck Finn is a darker book than Tom Sawyer.  There's no sense that everything has to work out well in the end, and Huck and Jim have some horrible as well as fun adventures.  This was summed up perfectly when Tom himself makes an appearance, when Jim has been recaptured.  Tom agrees to help free Jim but wants to turn it into some prison release fantasy, complete with letters written in blood and tame rats, but Huck knows the seriousness of the situation and just wants to help Jim. Tom's protected from the real world, Huck has to live in it.

A lot has been made about the use of word nigger in this book, especially recently.  For me this was a non-issue as Huckleberry Finn is far from a racist book.  Huck would have thought and used that word all of the time, as he was a product of the society he lived in.  It doesn't make the book racist and I certainly don't think it needs to be taken out, that would be like rewriting history to remove the nasty bits.  There are far more racist books out there that don't have the word nigger in them.

As you can tell, I very much enjoyed The Adventures of Huckleberry Finn.  My only real complaints would be that sometimes the stories felt a bit disjointed, almost as though I was reading a short story collection rather than a novel, and that the ending was way too happy/convenient compared to the rest of the book.  It was as though Twain suddenly remembered that this was supposed to be a children's book and decided to make everyone happy by the last page.  Even so, it's still a wonderful book and I'd definitely recommend it.