The Good Earth by Pearl Buck 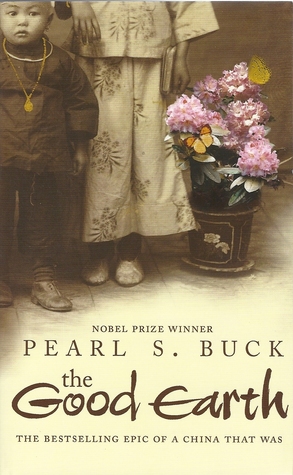 The Good Earth opens on Wang Lung's wedding day.  As the son of a farmer, his only option is to marry O-lan, a slave working in the great house of the village.  Although they start off as strangers and with next to nothing, Wang Lung and O-lan make a good pair, making the most of their land and growing family.  When a famine strikes and the family are forced to flee to the city, it is O-lan's determination and luck that keep them alive, and even enables them to return to their farm much richer than before.  As Wang Lung starts to accumulate more land and become more than just a peasant farmer, his expectations start to alter the family dynamics.  He starts to view O-lan as too simple, too plain and not enough for him.  As his sons grow up with more security than Wang Lung thought possible, the family begins to change for ever.

I really enjoyed The Good Earth.  Although Buck isn't Chinese, she lived in China for the majority of her life, and she presents the customs and attitudes of the time without judgement or condescension.  In fact, she doesn't even stop the story to explain things that would have been self-evident to Wang Lung, such as foot binding and the role of women, and this makes the story stronger.  Buck doesn't impose any Western ideas or views on her Chinese characters, even when their attitudes will make Western readers uncomfortable.

For me, The Good Earth was all about O-lan.  Having suffered through her childhood and adolescence, she is ready to live a quiet life with Wang Lung and devote herself to their family.  She suffers constantly throughout the book and yet is always thought of last.  Although Wang Lung does come to respect her in some way, for most of the book he ignores her presence, does not appreciate all that she does, and he is never able to love her.  When she returns to work the fields after literally just giving birth, he accepts this as what she should do.  O-lan made me wonder how many women there are like this in the world, forced by custom and attitudes to do everything for their family, never getting any reward or potential for personal growth, essentially giving up their own lives.  O-lan had so much inside her, but Wang Lung never thought to find out who she really was.

Another thing that struck me whilst reading The Good Earth was the parallels with Dickens' Great Expectations (this may sound strange, but bear with me).  Like Pip, Wang Lung starts to think of himself as grand, and therefore deserving things according to his new station.  A more attractive wife. Sons that are scholars rather than farmers.  Many rooms to their house.  Tenants that defer to him and treat him with respect.  As in Great Expectations, this can only end in misery for Wang Lung, something that is perfectly summed up in the last scene of the novel, which coincidentally was one of the strongest endings I've read in a long time.

I would definitely recommend The Good Earth.  I had my reservations about a book narrated by Chinese characters written by a Westerner, but these were unfounded.  The Good Earth is very well written with memorable characters, and I can't wait to read more of Buck's work.